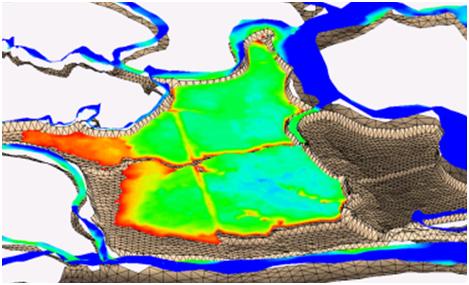 ​​Flooding in the Sacramento-San Joaquin Delta presents significant risks to residents of the Delta, the ecosystem, and the state’s economy. Areas of the Delta are at high risk for levee failures which would put hundreds of lives at risk and cause billions of dollars in damage. The USACE Sacramento District contracted Dynamic Solutions to compile existing information to analyze the risk of flooding for Delta islands and model levee breach scenarios on four islands using the ADH model.Army and Corps of Engineers guidance documents define risk as the “probability and severity of loss linked to hazards” and prescribe a composite risk assessment method to be used in Corps projects. Information regarding the relative probability of hazards and the severity of risk was taken from the Delta Risk Management Strategy (DRMS) Phase I and II documents and put into the Corps’ Composite Risk Matrix (CRM). From these results, four areas were chosen to demonstrate levee failure scenarios using the ADH hydrodynamic model using criteria of; life loss risk index, economic loss risk index, tidal and shear stress impacts, and annual failure rate. The four islands chosen for analysis were Sargent Barnhart Tract, Smith Tract, SM-124 near Suisun City, and Brannan-Andrus Island.
ADH is a state-of-the-art hydraulics modeling system developed by the USACE ERDC Coastal and Hydraulics Laboratory (CHL) that utilizes an unstructured mesh that is automatically refined to improve model accuracy while maximizing efficiency. ADH has been tested extensively for dam and levee failure scenarios and its computational scheme makes ADH accurate and efficient for these studies.
A 2-dimensional model of the Delta was developed extending from Carquinez Strait to Freeport on the Sacramento River and near Vernalis on the San Joaquin River. The model was validated to stage, flow, and salinity data from 2004. For each flooding scenario a detailed mesh of the island based on LiDAR data were connected to a calibrated ADH model of the entire Delta. The island meshes had such detail that, where necessary, roads and neighborhoods were partitioned to more accurately simulate flow through urban areas. Worst case failure scenarios were run for each of the four islands.
Model simulation results were found to be quite sensitive to the time step. Accurate propagation of the flood wave across the islands was important for this study because of the implications for emergency response planning. Parameters for ADH’s automatic time-stepping feature were tested and refined to achieve accurate and efficient solutions. Results showed inundation plots for various critical places throughout each island. Changes in salinity throughout the system were as great as 5 ppt in Suisun Bay for a breach on Brannan Andrus island which would have significant water supply impacts.
A methodology for modeling and analyzing the results of levee breaches using the ADH model was developed for the USACE. It can be used to inform and prioritize emergency response planning and provide insight for Delta management strategies to mitigate salinity intrusion and persistence which would affect the water supply and ecosystem. Emergency managers may use it to decide where stockpiles of emergency materials should be placed and how much time is available to enact those measures before significant impacts occur.

Return to the ADH page